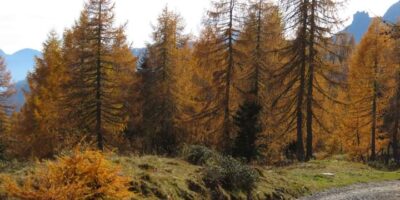 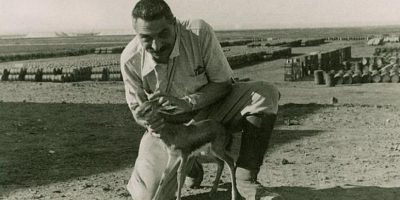 In Carnia, green is taken very seriously. Like in Twilight’s Forks, here almost everything is green: fields, woods, trees, meadows, lakes and even rocks and pebbles, when moss covers them.

We cannot grant the presence of fascinating and handsome vampires, but perhaps, during an excursion in the woods, among the bushes or sitting on a tree branch, you could spot a sbilf, one of the many mischievious elves who live here, or an agana, a mythical female creature  which is believed to look like a sort of an ugly fairy and to inhabit rivers shores or other wet places. Believe it or not, but we know a lady who is really sure to have a deep friendship with an agana and often takes her a basket of goods.

Panning shot of the so called Panoramica delle Vette, an almost completely tarmacked  35 kms mountain road which goes from Ravascletto to Tualis, a little hamlet of Comeglians municipality. The Panoramica offers a breathtaking view on the surrounding mountains and valleys. You can ride it by mountain bike or mortobike, you can hike it, or, if you prefer, you can go by car. Just… go!

This marvellous little girl, dressed in the traditional carnic costume, is enjoing herself in the green grass of the Mount Zoncolan, one of the hardest stages of many Giro d’Italia.

Mount Zoncolan in Summer is the ideal place for bikers and hikers, who can also rest in the mountain barns where eat and buy organic dairy products and typical meals. In Winter, Zoncolan is the paradise of snow sports such as downhill skiing, cross-country skiing, off track skiing, snowboard, ice skating, snowshoeing, dog sledding.

If you pay attention, you can see a sbilf hidden among the leaves. But only those who are pure in heart can spot him…

In Carnia you eat very well: the typical dishes are simple yet very savory, made with local organic products such as potatoes, cheese, meat, especially pork, smoked ham, smoked trout, vegetables and fruits. Soon we will devote a page to recipes only, but in the meantime we mention just some of the most tasty dishes.
Cjarsons, a type of ravioli with sweet or savory filling. We can see cjarsons as a metaphor of the carnic individualism and hardwork tendency: infact there insn’t a unique, single recipe, but they vary not only from valley to valley, but even from family to family, and each one swears that only hers/his is the original one. However, the sweet ones usually are stuffed with a mixture of minced raisins, pears, biscuits, nuts, cinnamon, chocolate, lemon peel, plum jam and are served with melted butter, smoked ricotta, minced buiscuits, cinnamon and sugar. Salty ones are filled with mixed herbs, raisins, stewed onion, mountain cheese.

Frico: Frico, accompanied by a steaming polenta is perhaps the most famous friulian and carnic dish. It is a sort of savory pie made by potato and cheese, roasted on both sides until it forms a crispy and tasty crust. There are two variants of Frico: with or without onions.
Actually, there is another dish also called frico, but this one doesn’t have potatoes: it is a mix of various aged cheese, grated and then fried in hot oil until becomes a golden brown  crust. It is then served with hot polenta.
Pumpkin gnocchi: served with melted butter, sage and smoked ricotta or with melted butter, sugar and cinnamon.

Tocj in braide: mountain barn cheese, goat cheese and ricotta are melted together in hot milk until they become a cream. Then, the cream is poured on a soft polenta enriched with sausage (optional) and morcje: melted butter in which a handful of cornmeal is browned.

Tocj in braide with sausage and potatoes frico on the left

In Carnia you can also buy and taste herbs, the Carnia chili, beans of the Pesarina Valley, fruits of ancient varieties, the Sutrio trout, honey, spirits, teas, cheeses, the smoked Sauris ham, organic beer, biscuits and much more … It is truly a paradise for taste and smell!

Carnia is peace, slowness, tranquillity…There is no traffic, crime, frenzy. A walk in the woods, through a mountain trail or along the shores of a lake is an experience that involves all the senses: the sound of water flowing in a stream or moving slowly in the lake, fresh air caressing your skin, wind whispering through the foliage of the trees, the chirping of birds or the sudden flight of an animal as you pass near it. The taste of a berry or a mint leaf that leaves its fresh taste in your mouth and the perfume of the wood in the early morning, which smells of dew wet ground, pine tree, buds and leaves, resin, mushrooms and sun… you cannot describe it, you just have to try it by yourself.

If you feel tired, stressed or just bored by your daily routine, what you need is to stop by our SPA in Arta Terme, famous since ancient Rome Age for its therapeutic waters. Make a reservation in one of the many hotels in the nearby and come here by yourself or with your beloved one and.. just relax, cuddle and have a great time! Info: www.termediarta.it

Our history and culture

In Carnia you can visit more than twenty museums, private collections and various permanent and temporary exhibitions, including the now famous exhibition of sacred art that takes place every year in Illegio, a small hamlet of Tolmezzo. we recommend a stop by the “Michele Gortani” Museum of Popular Arts and Traditions in Tolmezzo, one of the largest and most important ethnographic museums of all the Alps area, or the archaeological museum of Zuglio, the ancient Iulium Carnicum, where you can admire various Roman artefacts. Info: www.carniamusei.org; www.illegio.it

Churches, chapels, shrines… every village in Carnia, from the smallest to the largest, speaks of a still alive and deeply felt religiosity.

Whether you are worshippers, or you just want to discover the history and the works of art preserved in the various churches of Carnia, you should take part to at least one or two stages of the Cammino delle Pievi, a pilgrimage which winds along twenty stages and can be taken as a whole or choosing one or more of its stages.

The “pievi” are parish churches  built in a strategic position on the hills or uplands in order to be able to exchange light signals from one to another in case of danger, and in this way protect and guide the underlying villages. Info: www.camminodellepievi.it

Our emeralds and sapphires: lakes and alpine lakes

Carnia is adorned with small enchanting alpine lakes and three larger lakes: the Cavazzo lake, the largest natural lake of all the Region Friuli Venezia Giulia, and other two artificial ones: those of Verzegnis and Sauris.

During the Summer, the Cavazzo lake is the ideal destination for those who love nature and outdoor activities: on its banks there are two campsites, pic nic areas with barbecues, a children playground, a signposted path in which they are described the native flora and fauna, a boat rental and a sailing school.

Carnia, thanks to the great abundance of forests, has always been the home of the carpenters, whose mastery  has reached over the time very high levels. Tolmezzo, the biggest town in Carnia, can boast of having a carpenters workshop in which operates one of the rare violin makers of the Region: Gilberto Rossitti, who does not just build and repair violins, but also plays them himself with talent, passion and love.

But in Carnia we don’t have just carpenters: blacksmiths, potters, sculptors, goldsmiths, weavers, glassblowers, watchmakers…  all these artisans work with passion and tenacity and are glad to show you not just their handicrafts, but their workshops too. We surely can offer something for every taste and every need!

A fairy tale atmosphere in one enchanted village

Carnia counts 28 municipalities, and each one of them has several reasons to be visited again and again. Today, however, we will present you just two of these villages: Sauris and Pesariis.

But stay tuned! Soon we will show you more villages and return to Sauris and Pesariis agaiun, because there is so much to say and show that you cannot just settle with a little hint.

Sauris, Zahre in the local  ancient dialect, is the highest village of all the Region and an enchanted place overlooking a lake and embraced by lush green pastures, woods and mountains. In Sauris people don’t speak friulian language, but a german dialect: the first inhabitants, infact, came here in the Middle Ages from somewhere on the border between Carinthia and Tyrol. Due to the remote location, isolated from the rest of Carnia, Sauris has always mainteined and nurtured its customs and traditions. An example that immediately strikes visitors’ eye is the typical architecture, with wooden and stone houses, more similar to the Austrian ones than to the Italian’s. Also the ancient ritual of carnival is very peculiar and interesting: in Sauris, each family jealously guards its wooden masks, often built by an ancestor. During Carnival, the masks, which are divided into beautiful (scheana schembln) and ugly (schentana schembln), cover their faces with a mask or simply blacken them with soot, and wear old clothes and hats decorated by paper flowers or ribbons. Among these masks stand the Rölar and Kheirar, the most important figures of Sauris Carnival. The Rölar, with noisy cowbells hung to his belt, calls the masks, who join at a certain point of the village and then parade through the streets of Sauris, following the Kheirar and the musicians. Info: www.sauris.org

The Pesarina Valley is also called the Time Valley due to its production of tower clocks dating back to 1700. This valley, which lies in the shade of the Pesarine Dolomites, offers the visitors a beautiful natural setting, many hikes in Summer and cross-country and off-track skiing in winter. The Pesarina Valley, however, does not only offers bucolic landscapes and sports; in Pesariis, one of its little hamlets, there are four museums: the Path of the monumental clocks, outdoor through the streets of the village; the Clocks Museum, the Small Museum of Photography and Cinematography, and House Bruseschi, a little jewel for those who love carnic history and ethnography. Info: www.prolocovalpesarina.it

During the Summer, Carnia offers you so many opportunities to enjoy yourself outdoor: horse riding, cycling, sailing, paragliding, canyoning, mountain biking or walking through millenarian forests and flowering glades, discovering mountain huts and barns, Alpine lakes and a nature rich in plants, wild orchids and shy animals such as deers, marmots, eagles and even some rare brown bear. And in winter Carnia’s mountains mean skiing! And those who cannot or don’t want to ski, can put on snowshoes and enjoy the snowy trails and hushed atmosphere of the snow-covered mountains.